Showing posts from October, 2008
Show all

The Ranch..we are ready for the holidays! 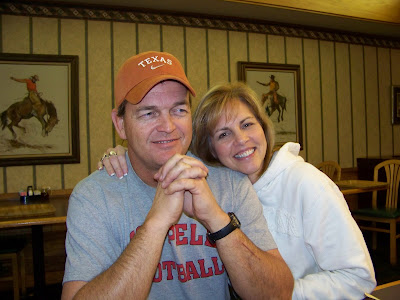 Brad and Debra
Michael and Benjamin being silly

Wes and his first buck! My how Wes has changed since last year.
The guys at Underwoods. Silly kids.

October 30, 2008
Well, things have been really crazy and completely nutty around here. Wes may have to have surgery on his knee next week. We will find out tomorrow. We are all getting more and more excited about the Longhorn vs. Raider game this weekend. The Horns are coming here to Lubbock and THEY JUST HAVE TO WIN!!! Wes says he is not going to school on Monday if they lose! Our boys will get overwhelming grief about it if that happens. ha. Anyway, Sid and I will be in a Tech Law School box (working game for Sid) and I am thinking about the ridicule I will get for yelling for Colt and possibly wearing burnt orange. (Sid won't let me, but I want to.)Right now I don't care what anyone thinks. I will be screaming for Colt and I hope that they blow em out!!
Post a Comment
Read more

2. Experience
Barack Obama: Graduate Columbia University and Harvard Law School, Community Organizer in Chicago, Illinois Senate for 8 years, and U.S. Senate for 143 days before running for President. He is an extreme liberal with no significant achievements and no example of reaching "across the aisle."
John McCain has 26 years experience: Graduate from Naval Academy, Navy Pilot, Prisoner-of-war, US Congressman for 4 years, U.S. Senate for 22 years. He is a reformer who has reached "across the aisle." 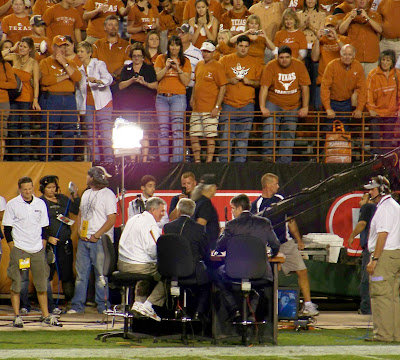 The back side of ESPN Gameday telecast.
Brad and Debra

October 17, 2008
My heart is heavy this morning with news of Sierra Brandt's cancer struggle. She is the daughter of one of my dearest friends, Lisa Brandt. She has struggled with cancer in her knee now for months and learned yesterday that the doctors will have to take her leg off below the knee on Monday so that she will survive this ordeal. She is so young, ninth grade I believe and full of life. Please pray for her and for her Mom and family. Pray for them to be brave and for God to give them the peace that passes all understanding.

Also, on a happier note our friend in Thailand Robert had a wonderful report from his surgery for cancer. It was looking like a sure thing but after surgery they told him that it was not cancer. Praise God! Why one prayer is answered and other are not is a mystery, but I pray that we can love and not doubt our God no matter what. I am reminded of this portion of scripture:

Yes, and I will continue to rejoice, for I know that through your prayers and the …
1 comment
Read more 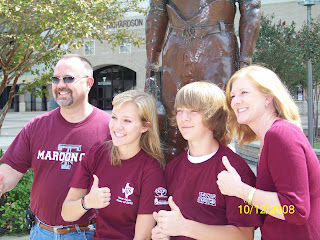 Charlie, Abigail (she is a freshman at A&M) , Brazos and Becky We were taking pictures in front of the 12th man statue at the stadium.
What a great family! 16 years they have lived in beautiful Colorado

It was the annual family Christmas picture weekend.

Wes was not liking his crutches.


We were blessed to be able to visit with Sid's family over the weekend and we went to the Aggie game. This is Shawna and McClain. Sweeties.

After the game. He is a happy guy!

October 14, 2008
Well, we are recovering from a fast and furious weekend trip to College Station following a great Friday night football game in which WILL PLAYED in. Yep...he is finally feeling up to getting back out there. He still has significant pain but is playing anyway. He caught a beautiful pass and ran for a 75 yard touchdown! It was so cool. On a sad note, Wes made a great tackle on Thurs. night and his knee hit someone's knee and he is now on crutches awaiting results from an MRI taken yesterday. We are praying it will not be too serious as I am really looking forward to basketball!!! He is not in too much pain so it can't be that bad right?

I guess I will stick with the football theme going so far and comment on Colt's game! What an awesome day for him. We are so thrilled that they are having such success and are loving this fun for him. I especially am proud of him speaking God's name and thanking Him. The best reason for them to keep winning is so that Colt ca…
Post a Comment
Read more

ONLY good thing about getting hurt in football 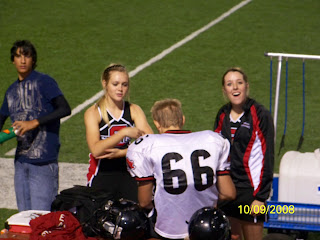 October 10, 2008
Will is going to finally try to get back into the game tonight. He will see how bad the pain is going full speed and go from there. Wes tackled someone last night and popped his knee. He is home resting and putting ice on his HUGE knee cap this morning and we will see the trainer this afternoon to assess his damage. I think it will be ok. Case has a really tough game tonight in Snyder. Brad says that they have lost a few of their linemen for different reasons and that Case may be running for his life. Scary. Chance has a home game and Colt has the Red River shoot out with Oklahoma. In the media it sounds like this is the biggest game of the year. I predict a win! Hook Em Horns, and God please protect especially Case and Colt from late hits and harm. We are traveling to College Station in the morning for the annual Christmas picture and Aggie ballgame. It will be a fast, fun... football filled weekend. Blessings to everyone!
Love, Amy
Post a Comment
Read more

October 10, 2008
Rejoice in the Lord always. I will say it again: Rejoice! Let your gentleness be evident to all. The Lord is near. Do not be anxious about anything, but in everything, by prayer and petition, with thanksgiving, present your requests to God. And the peace of God, which transcends all understanding, will guard your hearts and your minds in Christ Jesus.
Phillipians 4:4-7
I love this promise that God gives us... that He will GUARD our hearts and minds if we lay our requests before Him. This verse is a comfort to me because I worry too much. Today let us lay all our stress and worries before Him and let Him guard our hearts and minds, knowing that He is listening and taking care of our requests. Love, Amy
Post a Comment
Read more

Who You Voting For?

October 06, 2008
Please watch this utube video before you decide who to vote for. It is very enlightening.
http://www.youtube.com/watch?v=1RZVw3no2A4
Post a Comment
Read more 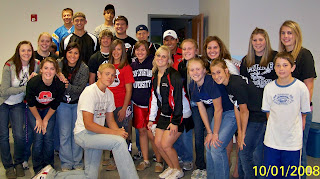 October 02, 2008
We celebrated Will's 18th birthday yesterday with friends from church and his school friends. How fast his years with us have gone and what a joy he is.
Post a Comment
Read more
More posts