Showing posts from December, 2008
Show all 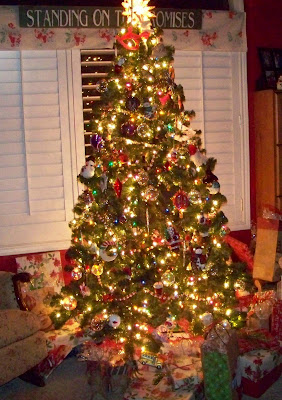 Our God, heaven cannot hold him nor earth sustain;
heaven and earth shall flee away when he comes to reign.
in the bleak midwinter a stable place sufficed the Lord God Almighty,
Jesus Christ.

Angels and archangels may have gathered there,
cherubim and seraphim thronged the air;
but his mother only, in her maiden bliss,
worshiped the beloved with a kiss.

If I were a shepherd, I would bring a lamb;

if I were a Wise Man, I would do my part;

yet what I can I give him: give my heart.


Merry Christmas. My prayer is that we will all give Jesus Christ our hearts everyday. Blessings on your holidays. 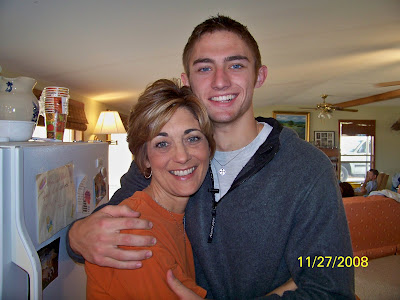 We are home tonight and have been watching the movie Home Alone together. The boys are so glad that school is out for a while. The music you are listening to is from this movie. It makes me sad and happy all at once. Funny how music moves me.

The thought hit me only a few minutes ago that Will's senior year is half over. We watched old home videos this afternoon and I loved hearing the laughter of our children. I guess maybe seeing those videos brought on this sentimental feeling. I have tried not to let myself think about it being Will's last year at home. God has been gracious in helping me not blubber everyday since the start of this school year. But, I have to say that at this moment my heart is feeling a little cracked. Kind of like it is starting to break a little.

Being a mom is what I always wanted to be. Wanting to be a working woman was the farthest thing from my mind. I am thankful that God allowed me to have the life I have had. I am also thankful that my husband wa…
1 comment
Read more 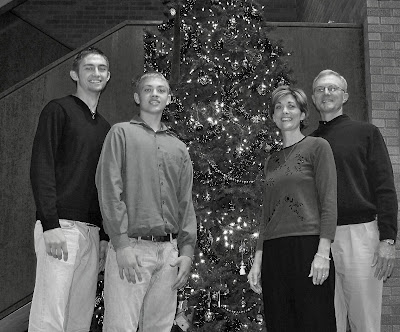 Just thinking back this morning. The video under the picture was taken about 5 years ago. Wes was so cute. We were in Red River, N.M. for Christmas. The picture above the video was taken this year. My how time flies. 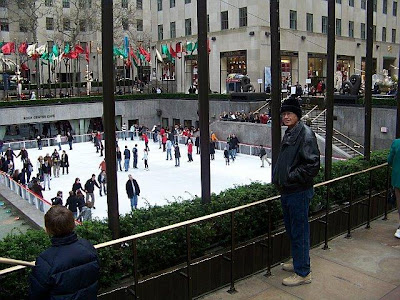 Hey again today! Here are some pictures Mom just sent me of their trip to New York. These are especially for our sweet family that might be checking in here. Hi !! to Joseph, Emily, Louann, Uncle Mike and Gail, Aunt Doris and Uncle Al, Linda and Danny, Debbie and James, Becky and Charlie, Shawna and Bill, Liz, Larry and Pam, Maria and Doug...and everyone else we love. Wish that we were not all so far away from each other. I wish you a warm fire, good food ,hot chocolate, lots of hugs, laughter and great fellowship with your loved ones. Merry Christmas! We love you all and miss you. DaddyBurl overlooking the Rockefeller Center ice skating rink


Some of the crew


The Texans in New York 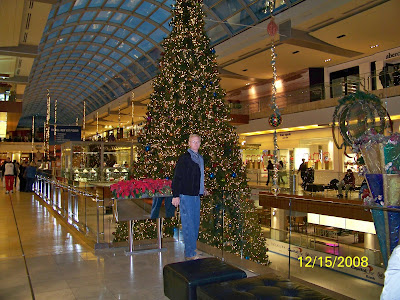 Hey all! It has been a few days or maybe a week since I have had time to get on here and post. A lot has transpired in the last week or so. Colt went to New York and fell just short of winning the Heisman. Second best football player in the US is not bad right? We are proud of him and even more thankful that he knows that football is not the most important thing in life. Being a godly, loving and obedient Christian is the most important thing in life.
Mom and Dad , Brad, Debra, Chance, Case and Rachel got to go to New York for all of the festivities. Mom and Dad even saw Tom Cruise and shook his hand. What a hoot. They loved seeing the Rockefeller Center Christmas tree and ice skaters. She is going to send me pictures and I will post them when she does.
Sid and I went to Houston for the Lanier Christmas Party. This year he had Miley Cyrus as his singer and it was a big ta do. We had a great time seeing old friends and making new ones. The Lanier's are warm, wonderful people. What …
Post a Comment
Read more

Ok, I know. The song for today through Sat. is just for Colt. The Eyes of Texas.
We will be cheering for you on Sat. Colt. Have fun in New York. Take care of GranJan and DaddyBurl. See all the fun stuff for us and bring back the Heisman!
Sorry Sid and Daddy Bob.
1 comment
Read more

December 10, 2008
This is an article off of Tim Spiveys blog site. I loved reading it so much that I had to share it with you. I hope he does not mind. It is inspiring me to be an encourager. Reminds me of a book I read a long time ago. The book is called "Balcony People". It is about being an encourager and affirming the worth of people. Let's learn to be encouragers of people's hearts.

I love Werthers.
I love them not only because they bear a striking taste resemblance to the nectar of the gods--coffee--but because of Bill Tolar.

When Highland Oaks launched the Plano campus in August of 2007, I will admit that I was a bit leary of who might show up. Would some of the brotherhood watch-dogs show up and make life miserable? Would the skeptics work to make sure things wouldn't succeed? In the end, the Plano campus proved to be a collection of outstanding Christian people. However, the launch was a time filled with uncertainty.
But, God answered my prayers...in Bill Tolar.
Bill i…
Post a Comment
Read more

I Heard The Bells On Christmas Day

December 08, 2008
Longfellow wrote "Christmas Bells" on Christmas day 1864 in the midst of the American Civil War and the news of his son Charles Appleton Longfellow having suffered wounds as a soldier in battle. He had suffered the great loss of his wife two years prior to an accident with fire. His despair in the following years after was recorded in his journal.

I heard the bells on Christmas day
Their old familiar carols play,
And wild and sweet the words repeat
Of peace on earth, good will to men.

And thought how, as the day had come,
The belfries of all Christendom
Had rolled along the unbroken song
Of peace on earth, good will to men.

Till ringing, singing on its way
The world revolved from night to day,
A voice, a chime, a chant sublime
Of peace on earth, good will to men.

Then from each black, accursed mouth
The cannon thundered in the South,
And with the sound the carols drowned
Of peace on earth, good will to men.

It was as if an earthquake rent
The hearth-stones of a continent,
And made forlorn, the…
Post a Comment
Read more 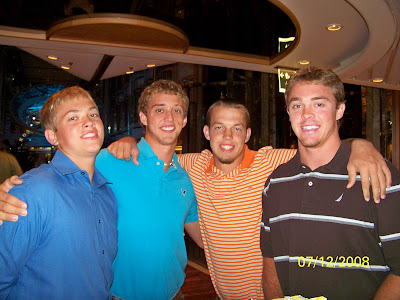 Wow...The days since Sunday and the announcement of the BCS rankings have been difficult to say the least. I am finally not spitting nails mad anymore but just sad for Colt and his team. Isn't it strange that Texas has beaten the two teams that are playing for the Big 12 Championship? Anyway...I won't go into all of that because it does no good to even try to talk it out. I just want to say that we are so proud of Colt and how hard he has worked and want to pat him on the back for an incredible season. It would be so fun if he won the Heisman award. I pray that he will have that blessing. There is no one more deserving than him. I am so thankful that he speaks the name of the Lord before millions of people whenever he gets the chance. We love him dearly. Great season Colt!
Post a Comment
Read more 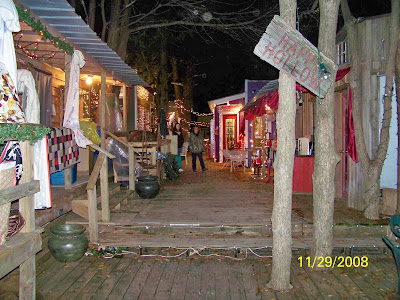 Our trip to Canton was so fun. It was cold and wet the first day and then just COLD. Of course we did not let that bother us. We were all pretty broke and so we did not do as much Christmas shopping as we have done the past 10 years but instead enjoyed just looking more and the fellowship. We ate good food, drank alot of coffee, laughed quite a bit, watched football, watched people and dogs, worshiped together and cried some together. I am thankful for sweet family and good friends. Thanks for a great time girls! Lets do it again next year!
Shops on the mountain
Our group with a spot left open for Becky.

Jan's goofiness and the Moms.


Mom and Debra- resting.
Doggie dressed up for Christmas

December 01, 2008
I wanted to look for some more Christmas music for this blog and came across an old song. This is one of Amy Grant's earliest songs that I remember. This song made such an impression on me. It is not a Christmas song but it brought back such precious memories that I wanted to share it. This song brought me closer to God and helped me to think about living my faith outloud. Thank you Amy for those early songs as well as the later ones. Your music has meant alot to this girl.
Post a Comment
Read more

Pictures from the ranch... 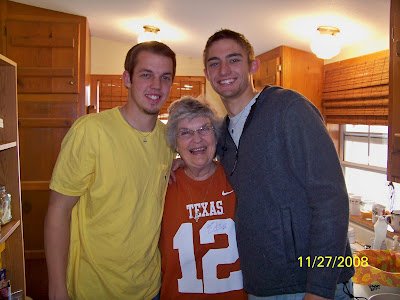 Thanksgiving was wonderful. Lots of good food and lots and lots of great fellowship. It is good to be with family. How wonderful that the boys have cousins and loved ones that they enjoy so much. The boys and their grandmother.
Sweet Debra

I love this shot of my sweet husband and oldest child. How beautiful...not the trees this time. I am so blessed.


My unbelievably wonderful Daddy. He showed us the most lovely trees on the ranch. Thank you Dad for how you love us and are so generous in every way. I loved being with you.